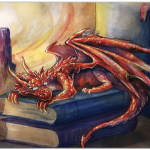 -Harry Potter--Read 10 times. *Pauses.* *Frowns.* No, Ted, I do have a life. That's not an appropriate question for this scenario! *Turns to audience* You know, I have to wear a tiny intercom in my ear, and it's pretty annoying when the host asks you random questions about "having a life", among other things. HA, Ted youve been ESPOSED

-Keeper of the Lost Cities

-The Rule of Thre3 (It's not a very well-known series, but it's REALLY good--about a neighborhood in a post-apocalyptic world)

4. I really, REALLY like orange chicken. I don't know, that just sounded necessary.

5. I like reading and writing, but I tend to start writing stories but never finish them...

7. I get REALLY impatient waiting for the next KOTLC books.

9. I love robotics and am in my school's robotics team.

10. Finally, but first priority/importance-wise (the list just kinda happened that way), I'm a Christian. If you have any questions feel free to ask.

Anyone want to learn about the Stegaria Union? The Santa's Elves cultists? The linking bridge to Canadaria? The truth of Lewis and Clark's Expedition? The evolution of the Stegos? Haven't heard of it? Of course not. They don't teach it in school. If you want to visit the wiki, go to stegoland-wiki.fandom.com. NOTE: This wiki is still under construction.

This club is open to anyone whether you're Sophitz or Sokeefe. If you love making arguments and/or overly analyze things, you can join! Contact me or SuldreenSong to join.

Retrieved from "https://lost-cities-keeper.fandom.com/wiki/User:EthanDaCryokinetic?oldid=506004"
Community content is available under CC-BY-SA unless otherwise noted.