Conversation Topics for October 2019
Click on a kwami to reveal one piece of new information for this month's club conversation. Pollen, Wayzz, Duusu, and Plagg all have episode spoilers, so don't click on their images if you are not caught up with the series!

Hello all miraculers! This is the Miraculous Club's first post, so here are a few rules and some club norms.

In addition to the wiki rules, here are some regarding the Miraculous Club:

And that's really it for rules! Other than that, you can do as you like in club discussions!

As for the norms, they are listed below:

Below are the dates of the episodes for the rest of season 3!!! The episodes that have already been released are Chameleon, Animaestro, Bakerix, Backwarder, Gamer 2.0, Weredad, Silencer, Oni-Chan, Miraculer, Oblivio, Party Crasher, Christmaster, The Puppeteer 2, Reflekdoll, Desperada, Stormy Weather 2, Ikari Gozen, Timetagger, Ladybug, Feast, Startrain, Kwamibuster, Heart Hunter (previously called Loveater), and Miracle Queen. For all of these episodes, there are videos posted on youtube. These videos will either be subs or dubs depending on the language(s) in which that particular episode was released. If you cannot find a video on youtube for a certain episode, ask a captain and they will help you.

(E) = World premiere will be dubbed in English (yay!)

Meanwhile, Gabriel (Hawk Moth) transforms into Scarlet Moth with the help of Natalie (Mayura) and succeeds in akumatizing the entire class, along with Marinette’s parents. However, Natalie loses her strength, causing Scarlet Moth to de-transform and help Natalie. He then tells her that she cannot be Mayura any longer and confiscates her Miraculous, but Natalie is adamant and refuses to listen, and while Gabriel is taking a nap, steals the peacock Miraculous and creates an identical twin of Ladybug, who is controlled by her, to trick Chat Noir into giving up his Miraculous. Chat Noir falls for the trick, but Marinette, who senses something is wrong, quickly transforms into Ladybug and arrives at the battle. She manages to prove that she is the real Ladybug, and the duo defeats the fake Ladybug by persuading her to join them. Since the centi-monster is now against Mayura, she decides to make her vanish, and battle Ladybug and Chat Noir herself. However, Hawk Moth shows up to protect Mayura, and holds Chat Noir captive, while Ladybug does the same to Mayura. Both Ladybug and Hawk Moth want to rescue the other, and leave their hostage, jumping to save their ally, successfully ending the battle.

Startrain Episode Summary: In the beginning of this episode, Marinette is debating whether or not to go on the class field trip to Big Ben, while Adrien is figuring out a way to go without telling his father. Marinette confides in Master Fu, who then gives her the horse Miraculous so that in case Hawk Moth struck when she was gone, she could quickly teleport back from Big Ben. The two end up making it to the train driven by Max’s mom, who is anticipating the results from her test to become an astronaut.

On the same train, an akuma was hidden in Sabrina’s suitcase- an akuma Hawk Moth sent after Sabrina’s dad. However, Hawk Moth lost control of the akuma and it ended up on the train, akumatizing Max’s mom into Startrain after feeling her negative emotions when her test results were late.

Luckily, both Marinette and Adrien were already on the train and sense that something is wrong, and they quickly transform. Ladybug and Chat Noir gave the horse Miraculous to Max (Pegasus), who’s robot is the only way they could open the doors that lead to Startrain. After passing a series of obstacles, they finally reached Startrain. Chat Noir destroyed the object in which the akuma was hiding using cataclysm, defeating Startrain.

Feast Episode Summary: Marinette, Alya, and Alix are at the museum because Alix’s dad had just found an old statue on the mountain top in Tibet. Alya is sharing her theories about the history of the Miraculous. Marinette is trying to stop Alya’s research to keep her identity a secret, however, she learns that Alya has already posted a video about these theories on her Ladyblog. Panicked, Marinette approaches Master Fu about the issue, who finally explains to Marinette the story of his terrible mistake. When Master Fu was in training to become a guardian, they made him watch the Miracle box for 24 hours straight with no food or water. Young Master Fu was angry, and without thinking, stole the Peacock Miraculous to create something that would bring him food. This backfired, and he ended up creating a centi-monster, which wanted to devour all of the Miraculous. Master Fu ran away with the last Miracle box and managed to escape the centi-monster and the crumbling temple, but he lost the Peacock and Butterfly Miraculous in the process.

While the girls were at the museum, Natalie sensed the amok hidden inside the centi-monster, which was currently stone and the statue Alix’s dad discovered. She talks to Gabriel, and both of them execute a plan to bring it back to life, which succeeds. Master Fu gets worried since the centi-monster he created was brought back to life, and knows that the centi-monster will only look for him. Hence, he takes away Adrien and Marinette’s Miraculous and flees the city, ready to take full responsibility for his actions. Marinette and Adrien want to help, so they make their own disguises and chase after Master Fu and the centi-monster. With some persuasion from Wayzz, Master Fu gives them back their Miraculous, and they both transform. Ladybug and Chat Noir then travel into the centi-monsters stomach, where they find the hidden amok from centuries ago. They destroy the amok, destroying the centi-monster as well.

According to this instagram post, season 4 will be airing in fall 2020! Unfortunately, that is a year away from now... :( Let's see what we can do until then! For now, we still have 5 episodes from season 3 left to go! 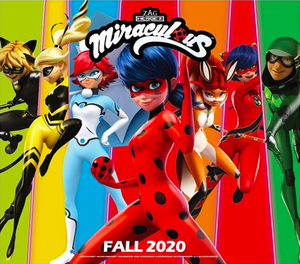 Ask a captain! The current captains are listed below in the member section. Once a captain gets back to you and adds you to the member list, you may put the club's badge on your wall by inserting {{MiraculousClubBadge}} into the source code of your profile.

If you are interested in being a captain, please message either SamSerene68 or Light and Bright and list 3 reasons as to why you'd like to be a captain. The remaining 3 captains will be announced at the beginning of October, when the next monthly discussion will start.

Retrieved from "https://lost-cities-keeper.fandom.com/wiki/Template:MCOct2019?oldid=485231"
Community content is available under CC-BY-SA unless otherwise noted.