Silveny or Glitterbutt, as Keefe calls her, is one of the last Alicorns known to exist, and the second Alicorn found. Accidentally found by Sophie Foster during Exile when Sophie was helping her adoptive father, Grady Ruewen, find a Sasquatch in the forest. Sophie was entrusted with the task of training the Alicorn, as she was the only one Silveny trusted. Later, Keefe earned the trust of Silveny, giving Grady hope that she was warming up to people. Silveny was moved into the Sanctuary to live with the other alicorn, Greyfell. As of Neverseen, Silveny is now roaming free with Greyfell.

Silveny is a pure white Alicorn with a glittery mane and tail. In Exile, Silveny’s tongue is described as purple. She has an energetic personality. In the beginning, the only person that Silveny trusts is Sophie, but she later trusts Keefe as well. After befriending Keefe, he nicknames her Glitter Butt because her feces also have glitter (as does her vomit.) Silveny also likes to eat swizzlespice. (A type of treat for alicorns that Silveny likes that tastes like cinnamon.) 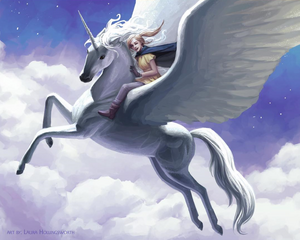 Sophie accidentally finds Silveny when she's looking for a sasquatch. Eventually Sophie light leaps Silveny and herself back to Havenfield. Silveny is placed in the pterodactyl enclosure until they get the cliffside enclosure ready. When the new enclosure is ready Sophie helps convince Silveny to go to it. Later on, the Hekses scare Silveny by trying to take her away. She ends up staying at Havenfield. Silveny will not let anyone get near her except Sophie. Sophie tries flying on Silveny, but ends up in sparkly horse manure. The Councillors arrived to see Silveny and are not impressed with the fact that Sophie is covered in literal horse poop. When night comes Silveny frequently transmits words or images to Sophie. Sophie gives a flying demonstration to the Councillors (and Keefe) outside of the enclosure, accidentally resulting in being teleported somewhere else. Sophie light leaps herself and Silveny back. While Sophie is being treated for being faded, Keefe is able to get Silveny inside the enclosure. Silveny likes Keefe after that, and is always shouting "KEEFE! KEEFE! KEEFE!" When Sophie needs to go to the Black Swan so she can be fixed she rides on Silveny with Keefe. After Sophie is fixed they try to leave on Silveny, but the people in black come and try to take Silveny. During this Silveny breaks her wing. The three of them manage to teleport back to Havenfield. The Councillors are not happy that Silveny is hurt. They think about exiling the Ruewens but change their minds when Sophie heals Alden. On the night of the eclipse Sophie and Silveny are the finale. They jump off a cliff and teleport down (because of Silveny's injured wing). At the end, Silveny flies for a short period of time. Then the Councillors escort Silveny into the Sanctuary.

Silveny makes fewer appearances in Everblaze than in Exile, as she no longer lives at Havenfield. Sophie and Keefe do visit Silveny at the Sanctuary near the beginning of Everblaze because Silveny was having trouble living with the other alicorn, Greyfell. Sophie learns that is because the Neverseen placed trackers in Silveny's tail while she was sleeping making Greyfell fear her. Once the trackers are removed, Greyfell and Silveny begin to get along. The Neverseen have always been after Silveny because she is a symbol of hope for the Elvin world, and they only want chaos. The Neverseen also want Silveny because she is a valuable bargaining chip. She is resetting the timeline.

After confronting Alvar, Ruy, Brant, and Keefe in a Neverseen hideout, Sophie, Tam, and Fitz capture Ruy and Brant. With not enough strength to carry them back to the Lost Cities by themselves, Sophie transmits to Silveny for help. Silveny soon picks up on Sophie's stressed mood and asks if she needs help. Even though Sophie doesn't know where she is, Silveny promises to find her and within seconds she and Greyfell had teleported to the Neverseen hideout. Silveny is noticeably bigger. The way Silveny found her so quickly makes Sophie realize that her ability to pinpoint the location of someone by their thoughts came from her alicorn-inspired DNA. Silveny asks if she can bite Ruy and Brant when Sophie tells her they are bad people. Sophie and Fitz climb onto Silveny's back with Ruy's unconscious body in tow and Silveny flies up to a high enough altitude to teleport, updating Sophie on her baby (everything is going fine). Silveny teleports the three of them back to Foxfire. Later, when Silveny and Greyfell prepare to teleport away, Silveny picks up thoughts from Sophie's mind about Keefe. Right before she teleports away, she transmits to Sophie, "KEEFE GOOD SOON!"

While Elwin heals Keefe's wounds, Sophie steps outside the room and calls Silveny. Silveny takes a while to respond, but when she does, she is as energetic as ever. Silveny assures Sophie that she and Greyfell are safe and doing well. When Sophie tells her she should visit soon so Vika Heks can check on the baby, Silveny refuses, only insisting that she will visit later. This is odd because Silveny is usually asking Sophie nonstop for a visit, while now she is flat-out refusing one. Before Sophie can ask any more questions, Silveny abruptly terminates their connection with the last assurance that she is busy and will talk soon. Later Silveny allows Amy to ride on her.

In Flashback, Silveny was refusing to visit Sophie for a checkup that nearly cost her babies their lives. Near the end of the book, Silveny was transmitting to Sophie that she was in pain, she had gone into labor early and her babies were born prematurely. It was soon discovered that Silveny was going to have twins. After the babies were born they were put into special troll hives to fully develop. The twin alicorns were named Luna and Wynn by Sophie and Keefe.