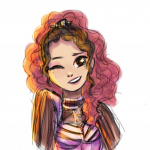 Some (oFfIcIaL) rules for my wall :)

1. Please be kind and respectful of all users, including me and yourself, and try to refrain from saying or joking about anything that could hurt anyone. Essentially, no jerkiness :)
2. Do not come just to argue against something I have said.
3. Do not butt into conversations that you have no place in. (if it's a discussion about mentoring, don't respond if you aren't a mentor, etc.) Check the OCC template below for more details. (if something says [CLOSED], don't respond to it. If something says [PRIVATE], don't read the messages. You get it.)
4. Do not read secret messages without permission, they are secret for a reason.
5. Please do not ask me for personal info reveals such as my full name, my age, location, email, etc. Some of those can be answered on the live chat, but not if you've never talked to me before.
6. If you are using an alt account or sending an anonymous message, please tell me who you are.
7. Do not intentionally try to break one of these rules as a joke.
8. Have fun!

1. Forbidden words: titin, exaggerate, instantaneous, barrette, haberdashery.
2. When asking a question, you must start the message with "I would like to inquire <insert question> of the Queen of Daydreeeeeeems.
3. If you stalk my edits, please tell me so that I can stalk yours. My SpammerStalker powers will always win.
4. Use as many <big></big> tags as possible (PLEASE DO NOT ACTUALLY, 15 is the limit because otherwise you will break my wall!).
5. Address me with the weirdest nickname you can think of so I can make one for you! :)
6. If you message me with a song lyric, be prepared to finish the song.
7. Why are you still reading this? Come on, spam me!

Riddle of the week!

Each week, I will post a new riddle here - respond with the answer in a secret message (no cheating and reading other answers) and you will be rewarded! "What belongs to you but is used more by others?"

If there is no [JOIN], [OPEN], [CLOSED], or [PRIVATE], the thread is automatically an [OPEN] one. In emergencies, the Open Closed Code excludes administrators.

← You did not specify any title
Loading editor
Newest replies