Keeper of the Lost Cities is a book series written by Shannon Messenger that currently consists of eight books, named in the order of: Keeper of the Lost Cities, Exile, Everblaze, Neverseen, Lodestar, Nightfall, Flashback, and Legacy.[1] It is published in various languages, including but not limited to: English, French, Russian, and Spanish.

Starting in 2012, a new book has come out each year. Book 8.5: Unlocked will be published in November 17, 2020, Book 9: Unknown will be released November 2021, and there may be more after that if it is needed. The books are generally sometime in the season of autumn for the Northern Hemisphere, or spring in the Southern Hemisphere. The more recent books have been published on Tuesdays in November.

The series follows the journey of Sophie Foster, who seems to be different from other humans. Not only is she a genius, but she also has an ability that no one else has: the ability to read minds. That is, that an ability she thinks no one else has. However, when she meets a cute, teal-eyed boy who tells her that she is not a human, but rather, an elf, her world turns upside down. This abnormal girl travels through a journey of pain, discovery, and love. The only question is, does she have what it takes to make it out of alive?

As she pushes through the hardships that the Neverseen, a rebel group of elves, send her way, she meets new people, sees new things, and forms new heartfelt relationships. Her friends and family help her along her journey.

After manifesting five abilities throughout the course of the books, one might assume that she would easily be victorious. But the Neverseen always seem to be one step ahead. A witness to many kidnappings, and experiencing one herself, Sophie Foster thought she was prepared for everything. But with twists at every step, she questions if things could get any worse, which always seems to happen. Experiencing betrayals and losses that she never thought were possible, Sophie still pushes through the hardships.

With the help of her friends, family, and creators, the Black Swan, Sophie Foster pushes through each battle she faces. The question that spreads among the fans of the New York Times bestselling series is, who will emerge as the victor? The Moonlark and the Black Swan, or the forces of evil? Read through this thrilling, heart-stopping book series to find out! 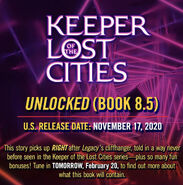 Book 8.5: Unlocked
Add a photo to this gallery

Start a Discussion Discussions about Keeper of the Lost Cities: Series