The Heks family is an elvin family, who are expertising in taking care of unicorns. The first one to have this position was Pelipa Heks, and it is currently in the hands of Timkin, Vika and Stina who live in Sterling Gables. Pelipa is Stina's great-great-great-great-great-great grandmother.

The Hekses are considered unpleasant people by many other elves, and are usually avoided. They also don't hesitate to criticize the Elvin Council and other members of the nobility. However, the Hekses are proud by their family name and are trying to up their social status.

The marriage of Timkin and Vika is exceptional, since Vika is an Empath and Timkin is Talentless, and such a pair is usually considered Bad Match. However, Timkin and Vika were actually in the match lists of each other. Unconfirmed rumors suggest that Timkin's sister's husband, who works in the Matchmaking Office, altered the records.

Because of their experience with unicorns, the Hekses were the ones to rehabilitate Greyfell, the alicorn when he was found a few decades ago. By that they helped reseting the Timeline to Extinction, which is why their family is well known among nobles. They have tried to get the responsibility to rehabilitate Silveny as well, but the Councill decided to give that responsibility to Sophie Foster, due to her ability to telepathically communicate with the alicorn. However, the Hekses had a crucial role in saving the lives of Silveny and her two newborns, Luna and Wynn, during Silveny's early birthgiving in Flashback.

A very tall and skinny Empath who is a Foxfire prodigy at the same level as Sophie Foster. She is somewhat considered a bully at Foxfire, and was particularly rude to Dex Dizznee. In Legacy, Stina became a Regent and a member of Team Valiant, and managed to cooperate with the other members and even improved their relationships.

ATalentless elf, the father of Stina and husband of Vika. In Neverseen it was revealed that he is part of the Black Swan under the disguised identity Coiffe, and had helped the Black Swan break into Exile.

An Empath who works in the Sanctuary, the mother of Stina and wife of Timkin.

Related to the Heks family and was on Jolie Ruewen's match list. Not much is known about him.

Mentioned in Exile. Silla was the elf who took care of Greyfell. She noted all kinds of interesting observations about the way the alicorn had affected her emotions. She also claimed that alicorns have a special way of inflicting their feelings on others - both good and bad. Silla relocated Greyfell prior to the the timeframe of the Keeper of the Lost Cities series.

Timkin Heks's brother-in-law, whose name is unknown, works at the matchmaking office. 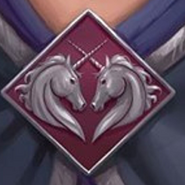 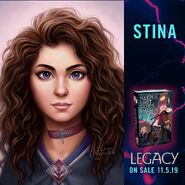