This book was first announced when Lodestar was released, and its title was announced on February 1, 2018.

The Barnes and Noble exclusive edition of Flashback features illustrated end pages and a bonus chapter from Fitz's perspective.

The paperback edition of Flashback, released October 8, 2019, features a sneak peek of Legacy and an extra scene from Keefe's point of view.

In this scene, Sophie, Tam, and Wylie are at some ruins in a forest where Luna and Wynn alicorn's hive is located, that the trolls are working on. On the cover, Wylie and Tam are working together to produce the illusion of a bridge leading to an endless chasm so that the baby alicorn will be hidden while they further develop. Sophie believes that she hears a noise in the woods and flings her goblin throwing star at it, not knowing it was one of her bodyguards (Tarina.)

She is wearing the new training clothes that Flori made for her, with many more pockets to hold weapons and other gadgets that Dex makes. Sophie is left handed because her right arm still in recovery from Umber attacking her with shadowflux. She has a bangle on her arm to improve her strength with her left arm. She also has a new Ruewen Crest specially made by Tinker (The Black Swan Technopath) that will scramble the Neverseens attempts at tracking her with technology.

Sophie Foster doesn’t know what–or whom–to believe. And in a game with this many players, the worst mistake can be focusing on the wrong threat.

But when the Neverseen prove that Sophie is far more vulnerable than she ever imagined, she realizes it's time to change the rules. Her powerful abilities can only protect her so much. To face down her ruthless enemies, she must learn to fight.

Unfortunately, battle training can’t help a beloved friend who's facing a whole different danger—where the only solution involves one of the biggest risks Sophie and her friends have ever taken. And the distraction might be exactly what the villains have been waiting for.

In this unforgettable seventh book in the New York Times and USA TODAY bestselling Keeper of the Lost Cities series, Sophie must let the past and present blur together, because the deadliest secrets are always the ones that get erased.

Many Vackers gathered to hear the Council decide what to do with Alvar, who had lost his memory. Sophie, Keefe, the Councillors, and bodyguards were the only non-Vackers present. The Council decided that they could not currently sentence Alvar due to his memory loss, and decided he was to spend six months at Everglen carefully observed. Fallon Vacker shows up, and protests Alvar's future residence at Everglen because of the possibility of something secret hidden there. Luzia Vacker, the mother of the famous Orem Vacker and founder of Everglen, discards these claims, stating that she only chose Everglen to relax after a long day of bending sunlight. However, Sophie, Keefe, and Fitz all think she is hiding something.

Sophie finds Fitz at a makeshift training area they had set up in the middle of nowhere. After a while of talking and training with Grizel, members of the Neverseen (Gethen, Umber and Ruy) show up. Umber tortures Sophie, Fitz, and their bodyguards using shadowflux, which we later learn was to motivate Tam to learn how to control it as well. This causes severe injuries to both Sophie and Fitz. Sophie presses her panic switch, and eventually, Dex, Wylie, and Lovise arrive to save them, getting minor injuries in the process. During this meeting, the Neverseen reveals that the caches Keefe got during his exploit in their base are fake.

Sophie and Fitz have shadow imprints from their attack by Umber, called echoes. Sophie has one near her head, Fitz near his heart. These lead Sophie to experience terrible nightmares based on her fears and traumas over the years, slowing her recovery, while Fitz has to manage his emotions, or else his breathing becomes constricted and his heart feels like something's crushing it. At first, Elwin attempted to fix it by inducing The Great Fitzphie Ooze Fest, but it doesn't work. Recovery time is spent resting from all their injuries, training in Exillium skills with Keefe and learning how to deal with their echoes.

After several weeks of recovery, Elwin allows Sophie and Fitz to leave the Healing Center—though not Foxfire. While they wander the halls at night, they find out that Tam has been training with Lady Zillah, to learn how to control shadowflux, every night, with Linh to keep him company. After more recovery, only Fitz is allowed to go home, since his echo was not as severe as Sophie's. At first, he wants to stay until she is released as well, but after Biana comes to visit, Sophie convinces him to go home and be there for his sister when Alvar comes to stay. She stays in contact with him, and learn about the deal he struck with his parents regarding his older brother.

Once Sophie gets back to Havenfield, Sandor greets her with four new bodyguards: Bo the ogre (who we later learn is married to Ro), Flori the gnome, Nubiti the dwarf and Tarina the troll. After everyone is introduced, Tarina starts a conversation with Sophie in her native tongue, asking for an alliance with the Moonlark on her queen's behalf. Sophie says she'll think about it. Sandor then sets up a training session for her, teaching her how to hold and throw a dagger with a dummy that Sandor painted with Gethen's eyes. He rigs the dummy with Lushberry Juice as blood to show her the horrors of battle, and Sophie freaks out, showing herself how unprepared she was.

When Sophie and Fitz both get wounded by shadowflux, they were stuck together in the Healing Center with Elwin. They grew closer throughout this time and at one point Fitz even hand-fed Sophie because she couldn't open the elixirs due to her arm. They even walked around alone through Foxfire one night. Throughout the book, their relationship grows closer, especially when Fitz tells her that she is the only one he wants on his matchmaking list while at Everglen. Sophie then admits her crush. They almost kiss before Silveny invades Sophie's head to tell her she is in labor and the baby is coming. Sophie often leans on Fitz's shoulder throughout the book, saying it is her favorite place. They have moments like this throughout the book. One point, before they meet with Fintan, Fitz comes to Havenfield and gives Sophie a teal heart-shaped locket.

After a visit to Fintan, Fitz and Sophie learn that the Neverseen are planning something for the Celestial Festival. The Black Swan makes a plan to use illusions to capture any Neverseen members: holograms of the keeper crew will be milling around the crowd, while the real crew walks along the perimeter of the festival, searching for members of the Neverseen. They come up with nothing, but Alvar's tracker says he is moving around Everglen. Fitz becomes suspicious and tries to shock him—however, Sophie's fake pin that she got from Tinker disrupts the gadget, and it doesn't work. Everyone then leaps to Everglen to stop Alvar.

They find Alvar at the gates, and Fitz tackles him to the ground and beats him. The Neverseen show up, including Cad, Ro's ex-boyfriend, and try and coax Fitz into murdering his older brother; if not for Sophie's words, he might have. But when he fails, the Neverseen disappear, revealing the images in front of the crew were just illusions. Sophie and her friends then follow them into the woods of Everglen, where they watch Alvar turn on the override and they discover the hidden Troll Hive.

Three of the baby trolls escape. One takes down one of Cad's guards, and the other two go after Sophie and her friends. They eventually defeat the baby trolls using their own teeth against them. In the fight, Umber gets crushed by the door of the hive and killed. Her skull is so crushed that it's impossible to determine her identity. Alvar is trapped in one of the birthing pods, but survives and later escapes using temperature regulation and breathing control skills, which Keefe says he excels at.

Soon after the battle of the hive, Silveny transmits to Sophie, saying there's danger and asking for Keefe and Tam. Sophie immediately teleports with Keefe and Tam to where the baby alicorns are being kept and finds Lady Gisela standing between Silveny and Greyfell. Lady Gisela says they need a Shade, due to Umber's death, and turns her attention to Tam. He asks Lady Gisela, sarcastically, if they plan on kidnapping him. Keefe's mom replies that they learned kidnapping doesn't work through Sophie's kidnapping and proceeds to shoot Silveny and Greyfell with a new version of soporidine. She then holds up the antidote and tells Tam the only way to get it and save the alicorn is to join them. When he still hesitates, she threatens the baby alicorns as well, causing an outburst from Keefe. Finally, Lady Gisela tells Tam that she has ways to hurt Linh, saying if he refused, "chaos would rain down on her within the hour." Tam finally agrees, despite Sophie's desperate assurances that they can protect Linh (which weren't very secure, since their last assured safety wasn't very safe) and Keefe's warnings that he's making a big mistake, with Tam replying, "Well, I'm not you." Tam hands Sophie the antidote, and Lady Gisela warns him that he will not have the same privileges Keefe did, and, until he proves himself, he is expendable. Before Sophie and Keefe can react, she knocks Tam out and leaps away with him. Sophie panics and wants to go rescue him.

Linh is the one that says they shouldn't rescue him, saying that her brother could take care of himself.

At the end of the book, Sophie asks her parents to register for the match. Grady immediately goes into protective father mode. Edaline, however, is ecstatic and helps Sophie get ready. They go to Atlantis with Sophie dressed in her best gown. When they arrive at the matchmaking building, Sophie takes a deep breath before walking in. Her registry feed alerts them she is there, so she waits in the waiting room as people whisper around her about the fact that Sophie Foster is registering for the match. She is pulled into a room alone with two workers whose movements are the exact same. They ask her some questions, including who her birth parents are. Sophie cannot answer this because she was never told. After a few minutes of awkward and anxious waiting, it comes back that Sophie Elizabeth Foster is UNMATCHABLE. It is presumed she is unmatchable because she does not know who her genetic parents are. 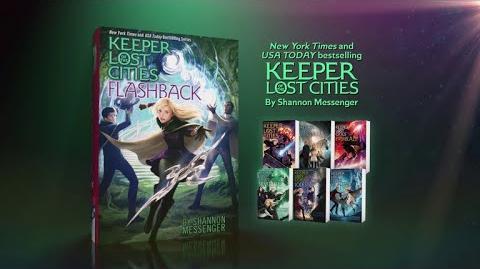 Sophie and Keefe inside Havenfield

“She sat with Keefe on the staircase at Havenfield, the light from the chandelier forming a soft halo around her as she leaned toward him, clinging to his hand while he turned away, his eyes slightly watery. It didn't look like a happy scene, and it took her a moment to realize she was seeing the moment she'd told him what little she'd learned from Fintan about Keefe's shattered London memory. But underneath the sketch, in neat, bold letters, he'd written the words she remembered telling him that day: Lots of people care about you, Keefe.”