The cover of Nightfall illustrates (from left to right) Keefe Sencen, Linh Song, and Sophie Foster holding hands to form a circle reflective of a scene in the book.

The three of them are dressed up formally and wearing capes: Sophie is wearing a white, frilly dress with bell sleeves and grey leggings; Linh is wearing a jade green silk coat dress with Chinese button knots sewn on her left side, with long black stockings; Keefe is wearing a crimson coat, lined with golden buttons and with pockets on the sides, over a long-sleeved white blouse, and a pair of ankle-length tapered black pants. Sophie is wearing ankle boots, Keefe wearing formal black dress shoes.

Sophie is seen to have a slight flush, and she is staring at how she is holding Keefe's hand (or how high up they are.) Keefe is staring at Sophie's face and he has a bright smile. Linh is staring into a unknown space. Her eyebrows are furrowed in concentration.

It can be noted that Sophie does not have her Enhancer gloves on, because she is enhancing Linh so that she has the strength to control such a large amount of water.

Sophie Foster is still struggling. Grieving. Scrambling. But she knows one thing: she will not be defeated.

The Neverseen have had their victories—but the battle is far from over. It's time to change tactics. Make sacrifices. Re-examine everything. Maybe even time for Sophie to trust her enemies.

In this spectacular sixth book in the New York Times and USA TODAY bestselling Keeper of the Lost Cities series, Sophie must uncover the truth about the Lost Cities’ insidious past, before it repeats itself and changes reality.

Sophie Foster is struggling. Grieving. Scrambling. But she knows one thing: she will not be defeated.

The Neverseen have had their victories—but the battle is far from over. It’s time to change tactics. Make sacrifices. Reexamine everything. Maybe even time for Sophie to trust her enemies.

The path of ancient silver and gold stones shouldn’t exist—and yet it had been there all along.

She glanced at her friends as they braced themselves for the dangerous journey ahead, and found their expressions mirroring her own.

Whatever waited in those murky depths was far more than a secret.

It was an answer.

And it was time to uncover it.

Time to stop believing the pretty stories they’d been fed all their lives.

Time to see their world for what it really was.

Time to take something back.

Sophie Foster, Fitz Vacker, and Keefe Sencen talk to Sophie's human sister Amy Foster, who remembers Sophie when she sees her, triggering her memories. As they make plans to bring Amy to the Lost Cities, Alden, Sandor, and Grizel take charge of matters. Alden sedates Sophie and Amy when they light leap home. Sophie is originally mad at Alden Vacker after waking, but after he explains his reasons she accepts what he did was okay. She then has to explain to Amy the entire elvin world, including her friends, Fitzroy Avery Vacker, Keefe Sencen, Dexter Alvin Dizznee, Linh Song, Tam Song, and Biana Vacker.

Mr. Forkle reveals to Sophie and her friends that he had an identical twin brother; there were really two Forkles all along. While one of them died in Lumenaria, the other is still alive. Sophie is unsure how to take this sudden revelation, causing a lot of mixed feelings.

Following that, she contacts Lady Gisela a lot, sometimes with or without Keefe. Lady Gisela instructs them to do many challenging tasks, including finding and retrieving her Archetype, which Sophie finds irritating due to her lack of explanations, particularly about Cyrah Endal's death. She eventually tells them, but Sophie is annoyed that Lady Gisela took so long. Her first task is to deliver a note from Lady Gisela to King Dimitar, and get the starstone hair clip that belonged to her. The note explained that she wanted King Dimitar to fight Keefe to see if he was worthy of his daughter being his bodyguard. This causes a lot of conflict between Sandor and Princess Ro.

King Dimitar fights Keefe, and Keefe wins but suffers serious injuries, which Elwin manages to heal, although Keefe is on bed rest for a week. One might notice that Sophie is feeling very disoriented during this journey, and that can be blamed on a kiss that she shared with Dex. Dex reveals his feelings for her, and she kisses him to help show him they were not meant to be. This possibly could have ruined their friendship, and Sophie doesn't know what to do. The kiss made Dex realize that Sophie and Dex would not be able to be in a relationship.

After much debate on who should go to Nightfall, Mr. Forkle suggests that they bring a Pyrokinetic. Marella, who has manifested as a Pyrokinetic, agrees to come along. Sophie and her friends set out to rescue her parents from Nightfall. In Nightfall, they find nothing but an unconscious Alvar. They bring Alvar to Choralmere. Livvy attempts to wake Alvar, but he is unresponsive to all her elixirs. To ensure that the Neverseen are not tracking Alvar with ogre enzymes, Physic dusts him with reveldust. A mark on his foot glows purple, and after hailing Lady Cadence, they discover the mark is glowing in reaction with soporidine, an extremely potent sedative. Livvy also discovers that Prentice was exposed to soporidine.

Grady tells the council about Amy, Sophie’s human sister, and Bronte asks to meet her. They bring Amy to Havenfield and she is stunned by the elves' beauty and wealth. Amy even gets to ride the alicorns, Silveny and Greyfell, before the sister share a touching moment. Amy thanks Sophie for all the stuff she does, and says she will be fighting for a happy ending too! Lady Gisela hails Sophie, and tells her that there are two Nightfalls: her facility, and the original Nightfall, built by Vespera. She also discloses that the Black Swan is keeping crucial knowledge from Sophie and her friends. They then ask Mr. Forkle for the information, and he transmits to all the elves in the room the original purpose of Nightfall: human experimentation. This means that the humans may have had good reason to start a war with the elves, and cutting them out of the treaties was wrong.

At Vespera's Nightfall, Biana tackles Fintan and Vespera, removing Fintan's thinking cap and fighting Vespera. Once Fintan's cap is off, it allows Grady to mesmerize him into punching himself. Grady also mesmerizes the gorgodon into collapsing after Sophie enhances him. They find Sophie's parents, and Sandor and Grizel leap them home. After finding Biana passed out in a pool of her own blood, Biana tells them where Vespera went, and Dex leaps Biana away.

After this, Lady Gisela and Ruy Ignis trap Vespera in a Psionipath shield. Lady Gisela then forces Vespera join her, and Ruy rips open a part in the force field around Atlantis, causing it to flood. Sophie then enhances Linh's abilities so that she can suck all the water out of Atlantis and keep it out until the Psionipaths arrive so that they can patch the hole with their abilities.

Sophie's family receives the cure after striking a deal with Fintan, and Amy chooses to keep her memories in the end, partly thanks to Sophie's Enhancer abilities. Bronte is a big help, and Sophie shares a touching moment with her surrogate mother.

At the end of the book, Alvar wakes up, but upon questioning he asks "Who's Alvar?" which ends the book, signifying that the Neverseen have wiped his mind. 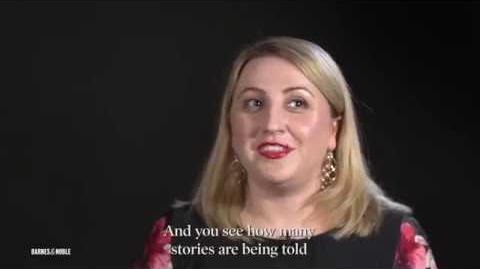