“I just. . . I'm tired of being left out. I know it's partially my fault, because I've been a jerk to you a few times. But I'll never do that again. And I have a special ability now. And I really want to help with whatever you and Keefe are working on.”

Foxfire Prodigy, a member of the Black Swan, and an Exillium Wayward (formerly)

Biana Vacker (Bee-ah-nuh Vack-er) is the only daughter and youngest child of Alden and Della Vacker. She lives in Everglen with her older brother, Fitz. Alvar moved out before the first book.

In Keeper of the Lost Cities: Everblaze, she manifests as a Vanisher, like her mother; Della Vacker and oldest brother; Alvar Vacker.

Biana is said to be strikingly beautiful. She has long, gorgeous brown hair and bright teal eyes like her brother Fitz and her father. Many boys at Foxfire are said to have crushes on her based on her appearance, including Jensi. Sophie describes her as being very alluring, flawless, glamorous, and perfect. She also thinks that Biana takes after her mother, Della Vacker, who is also quite stunning. She has a lot of "girly" things such as hair curlers, lip gloss, jeweled combs, beauty elixirs, and dresses. In Nightfall, Vespera gave her thin scars on one side of her face. (Edaline says the scars are almost invisible, but still there. She took elixirs to make them fade away.)

Biana Vacker's personality is very loyal. She can be wary of people who she doesn't know very well or trust. But once she does know you she'll fight to the death for you. Many people have tried to use Biana to get to her brother Fitz Vacker, because of this Biana hated Sophie in the first book.

When nervous or worried Biana twists her fingers, kind of like how Sophie Foster pulls eyelashes.

At the start of Keeper of the Lost Cities, Biana dislikes and avoids Sophie. Her father, Alden, later makes her become friends with Sophie so that she will go over to their house more often and Alden can watch her. Biana ends up actually liking Sophie and they become true friends. She often plays Base Quest with Sophie, Keefe, and Fitz.

In Exile, she was depressed after Alden's mind is broken and didn't want to see Sophie after that. She was still upset and blaming Sophie was the easiest thing to do. She also did not appreciate Sophie coming to Alden's funeral. In the end, she hugs Sophie and apologizes for her actions. When Sophie sees Biana she is mostly crying or not speaking while Fitz makes rude comments.

In Everblaze she manifests as Vanisher, like her mom and brother, Alvar. She manifests earlier and stronger than Alvar, being able to fully disappear and reappear earlier.

She goes to join the Black Swan in Book Four and shows that there is more to her than beauty. Biana is very hardcore and has been taught how to defend herself by her parents. She also respects Della as a mother and a role model for Vanishing and aspires to be as good as her someday.

In Lodestar she helps with deciphering codes and spends time at the Exillium sessions.

In Nightfall, she is crucial to sneaking them into places because with Sophie's Enhancing she can make up to two people vanish with her. She also gets severely injured with shards of a mirror when she attempts attacking Vespera and Fintan by herself.

Fitz is Biana's older brother. She is always described as Fitz's younger sister, but in truth, she has her own personality can stand by herself. In the first book, she explains that she hates the fact that a lot of girls try to be friends with her, using her to try and get to Fitz. When Fitz and Sophie were splotching against each other she cheered for Fitz (mainly because she didn't like Sophie at that time). When Sophie and Fitz returned from the healing center she hugs Fitz. In Book Four, when Fitz is injured in Exile, she helps with his treatment by providing him with something to vomit in. Fitz is usually described as being very protective of Biana, and the two siblings have a very teasing relationship.

​Alvar is Biana's eldest brother who is also a Vanisher. He's the one who tells her about what happened to Alden in Exile. In Neverseen, after the crash of the bridge in Ravagog, Biana screams hysterically when she doesn't see Alvar and hugs him tightly when he reappears. Also in Book Four, when Alvar is revealed to be one of the longest-standing members of the rebel group the Neverseen, Biana is deeply hurt and asks him "How could you?" and his expression softens when he explains to her what he did.

​Della is Biana's mother. They both like to shop, are described to be beautiful and are Vanishers. Biana is revealed to respect Della a lot in Book Four, and she wishes she could one day be as good as her mother at Vanishing.

​Alden is Biana's father. He made her befriend Sophie. When his mind was broken she became very sad and would not talk to anyone. It is shown that she loves him very much, especially in Book 4: Neverseen, when she wraps Alden in a big hug after the ordeal in Ravagog.

​Sophie is Biana's best friend. She originally became friends with Sophie because her father told her to, but then she begins to like Sophie. When Stina tells Sophie that Biana was friends with Sophie just because Alden told her to, Sophie became very angry at Biana and stormed away before she was able to apologize. She soon was able to make it up to Sophie afterward. Sophie has borrowed some of Biana's dresses a couple of times. They usually play Base Quest along with Fitz and Keefe.

When Alden's mind was broken, Biana refused to speak to Sophie, along with her brother Fitz. After Alden was healed, however, Biana immediately apologized for her actions, and the two became friends again.

In Book 3: Everblaze, when Sophie comes to visit Everglen, she is surprised to find out that Biana is a Vanisher. Later, she convinces Sophie to let her into her "Black Swan problems". When Sophie is said to be in danger, Biana is in the group who goes to find her at Mr. Forkle's hideout. She fights off the main attacker that keeps Sophie captive and frees her. When Sophie is planning on escaping from the elf world to hide with the Black Swan, Biana is one of her friends who willingly accompanied her on her journey.

In Book 4: Neverseen, Biana is the one who accompanies her to the Neutral Territory Brackendale. And when they accidentally bump into one of the members of the Neverseen, Ruy Ignis, she was the one who threw her Black Swan pendant at the force field he had created and distracted him so that the two of them could escape.

Jensi is Biana's friend. He seems to admire Biana a great deal, and he may have a crush on her. He doesn't see her anywhere other than school usually, but he has expressed concern when she isn't there and is very happy and excited for her when she manifests as Vanisher. However, Biana doesn't seem to return his feelings.

Keefe is Biana's friend. He usually plays Base Quest with her, Sophie, and Fitz. Keefe once kissed Biana "mostly on the cheek" for a dare, because Biana turned her head at the last moment. In Neverseen, Keefe drapes his arm around Sophie and Biana just stares at it. Biana is holding Keefe's arm on the cover of Neverseen. Biana blushes a bright pink when she announces that she agrees with Keefe about the naked statue, which may be because of the statue itself or just the fact that she's agreeing with Keefe. In Nightfall, Sophie believes that Biana's small crush on Keefe is starting to fade, although she has no evidence of this happening. Keefe admits to flirting with girls around her to give her a subtle hint that he isn't interested.

Dex is one of Biana's best friends. In Lodestar they both were left out of a mission and became even closer because of it. Dex and Biana do prove to have friendly feelings for each other in Lodestar when Biana gives Dex a makeover. Their "team name" is Bianex. After finding out Sophie's Imparter was broken, Biana gave Dex a makeover and Dex blushed a lot.

Tam is shown to possibly have feelings for Biana when he "stole a glance" at her after he assured Sophie he was not romantically interested in her. It is also said in Lodestar that Tam prefers brunettes, like Biana, by his sister Linh.

Although they have not had that many moments together, they consider each other friends. Biana thinks Linh has really cool hair and accepts her.

Stina is Biana's enemy. She is also the one who tells Sophie that Biana only became friends with her because Alden told her to.

Woltzer is Biana's assigned bodyguard who often has many difficulties with keeping up with her since Biana is known to vanish a lot, which makes his job ten times harder. 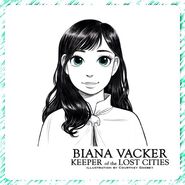