Swizzlespice for treats and mainly grass for food

Unknown
Alicorns are horses with feathered wings and a horn jutting out of their forehead.

Elves thought they knew about every creature that existed — until they found the first alicorn; a male named Greyfell, who Silla Heks and her family trained.

They'd been searching for another alicorn for centuries until Sophie found the first female alicorn, which she named Silveny while attempting to track a sasquatch with her adoptive father Grady, her best friend Dex, and bodyguard Sandor in Book 2: Exile.

Now there are a total of four known in the Elvin world — Silveny, Greyfell, Luna, and Wynn. Many consider them the rarest creature on the planet.

The elves feared that losing both Silveny and Greyfell would ruin the Timeline to Extinction until Luna and Wynn were born.

Alicorns can teleport, inflict positive emotions, and track thoughts to their exact location.

The rarest creature on the planet, with only four in existence (Silveny, Greyfell, Wynn, and Luna) — and that number is a recent development. Alicorns have shimmering silver fur, feathered wings, brown eyes, a wavy silver mane and tail, and a white-and-silver-swirled horn jutting out of their foreheads.

Alicorns are white horses with white wings, a silver-white horn, and a white mane and tail. Every bit of them sparkle, even their feces, and as Sophie finds out from Silveny's morning sickness, their vomit. However, the tips of the wings of male alicorns are blue and they are said to have purple tongues.

“Their manes looked silvery and feel like ice, and their horns look like a mix of swirling white and silver.”

Silveny is the alicorn Sophie found in Book 2: Exile. She lived in the Sanctuary and is very important because she was the only female alicorn known to exist in the Elvin world before Luna and Wynn's birth. Silveny is very fond of both Keefe and Sophie and every mention of Keefe makes Silveny chant "KEEFE! KEEFE! KEEFE!" in Sophie's head. Much to Sophie's dismay, Keefe gave her the nickname "Glitter Butt" because of her shimmery feces. Silveny and Greyfell can teleport (Sophie can as well, since some of her genes were based on alicorn genetics) and they sometimes live in the Havenfield Sanctuary with their two alicorn babies, Luna and Wynn. Sophie has a special relationship with Silveny, who helps Sophie sleep by sending calming images into Sophie's mind at night.

Greyfell is the only known male alicorn prior to Luna and Wynn's birth. He has blue tipped wings like his son Wynn. He currently lives with his mate Silveny and his two alicorn babies. Sophie learned through her telepathy that Greyfell had a hard life before he was rehabilitated, seeing his family and friends hunted and killed by humans and ogres alike. He flies with Silveny, going where she goes. Before Silveny was found, he was the only known alicorn.

In Neverseen, Lodestar, and Nightfall, it is confirmed by Silveny that she is pregnant. In Flashback, Luna and Wynn were prematurely born and had to live in a special troll hive for a period of time in order for them to develop fully. Sophie and Keefe gave Luna and Wynn their names. Wynn had the blue streaks on his wings like his father, while Luna looks more like her mother.

In book 2, Sophie finds Silveny in a forest, while out looking for sasquathes with Grady and Dex. They communicate telepathically before Sophie, despite Grady's wishes, light leaped with Silveny back to Havenfield.

However, soon after Silveny had settled in her new enclosure (and developed a taste for swizzlespice), Vika, Stina, and Timkin Heks attempted to kidnap her. Silveny telepathically called Sophie for help, and they stop the Heks from taking the alicorn, but not without Silveny dive-bombing Stina.

Sophie attempts to ride Silveny some time later, and ends up going on a wild ride before being dumped in a pile of rather sparkly alicorn feces. The Council, Biana, Fitz, Alden and Keefe happen to arrive just in time to see Sophie's disgraceful dismount.

The council discuss allowing Sophie to keep and train Silveny, almost deciding to give her to the Heks, but deciding to give Sophie a few weeks to show some improvement in Silveny. Sophie ends up succeeding, also discovering that she can teleport.

In book 7, Sophie finds out that Silveny and Greyfell are having twins. They had to sleep in a troll hive in order to grow properly

“Wynn wasn't just adorable. He was a true miracle baby, since he and his twin sister, Luna, were the first alicorns to ever be born in the Lost Cities.” 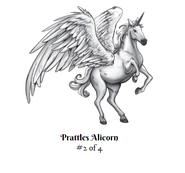 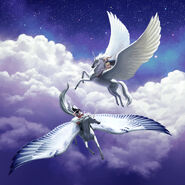 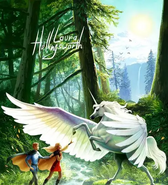