Lost Cities Keeper Wiki
Register
Don't have an account?
Sign In
Advertisement
in: Elvin Traditions, About the Elves, Elf
English

Like humans but prettier than the average human, all have blue eyes, except for Sophie Elizabeth Foster

Unknown
The elves once lived in harmony with the humans under the treaty given to all the intelligent species, but they were taught that humans wanted to rule the world instead of sharing it. Humans made disastrous weapons that had the potential to destroy the world, and didn't know how to control them. For the safety of them all, the elves decided it would be best to sever connections with the humans completely. After the elves left, humans started making myths about them. Atlantis, Shangri-la, unicorns, and pointy ears all came from elves. As the humans eventually started to forget about the elves, the people who did remember the elves told these stories which became the myths. However, elves could not completely sever ties and they started the Human Assistance Program, designed to help humans with inventions. But instead, they started to make harmful devises so the program was terminated. 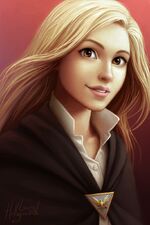 There is a small elvin group called the Black Swan. The Black Swan knew that the elvin way was not working, and implemented change. They created Sophie Foster, a girl of both worlds, and placed her with the Foster family in San Diego, California. She had seen the flaws in the Forbidden Cities, as the human world was called, but when a mysterious boy named Fitz Vacker brought her to the Lost Cities at 12 years old, she saw the flaws in her new home too. As she finds out more about herself and the Black Swan, she and her friends start to see that what they originally had seen as perfect was not perfect at all.

She showed compassion and felt the need to protect her family, friends, and even just allies. This led to the events in the Keeper of the Lost Cities series. The elves live in a non-violent world that has changed ever since the rapid growth of the two rebellious groups, the Black Swan and another group called the Neverseen. From Sophie and many other elves' perspective, the Black Swan are good, whereas the Neverseen have bad intentions, and the Council on a middle ground.

The elves can be broken down to the nobility, working class, and the Talentless. Elves have various titles to display certain statuses, such as "Lord," "Lady," "Councillor," and more.

The Council is the ruling body of the Lost Cities. They make the laws, but they have a few rules specific to themselves that they must follow:

Councillor Alina (As of Everblaze) (Replacement of Kenric) (Beguiler)

When they take part in violence or do something particularly cruel, guilt consumes elves so much that their minds may break from it, whereas humans may do horrible things without any guilt at all. This is part of the reason that the Neverseen, who have tortured, hurt, and killed throughout every book in the series, are so unstable.

Elves can manifest special talents that make them able to do things humans never could like to read minds, control the elements, and turn invisible.

All elves have natural abilities that humans don't, like levitation, regulating their body temperature, and telekinesis.

All elves, except Sophie, have blue eyes.

Elves haven't died of old age so far, though they can be killed.

Many humans eat meat, while all Elves are vegetarian.

According to Fitz Vacker, elves are much smarter than humans in general. Sophie seems to be a prime example of this : she used to be a genius who skipped 6 grades in the Forbidden Cities, but she is one year behind while still mostly struggling in the Lost Cities even after 2 years of accommodation. She isn't seen as an academic genius by most her classmate anymore, and a few of them even consistently have better grades than her.

Because of biological predisposition and advanced medicine, there are very little risk of a elvish pregnancy ending in a miscarriage or carrying genetic diseases. Additionally, elf women (and human women carrying an elf fetus) are aware they are pregnant from the very day of conception and implantation because their belly button puffs out and becomes pink. They see birth as a mere milestone in their child's development, not any more significant than their first breath or their first steps. Elves also do not feel pain, only discomfort, when they give birth. Because of their views on life and the lack of uncertainty surrounding childbirth, elves count age from the date of conception, contrary to humans who in some cultures wait several days after birth before giving their baby a name, for fear they won't survive through their newborn days. As a result, all elves introduced in the Books are actually about 9 months younger than their disclosed age by human standards. Della Vacker and Mr. Forkle have expressed that they are dumbfounded humans still chose to have children (at a much higher rate than elves too) when pregnancy is so painful and can go so horribly wrong in so many ways.

Because they are biologically immortal and have an infinite number of them, elves do not celebrate birthdays.

Light is the foundation of the elvin world almost shaping every aspect of their culture because it is what allows the Lost Cities hidden. Which is why they use crystals in their architecture, gadgets, and fashion.

Elves are remarkably intelligent, which gives them a higher capacity for understanding. But, it also gives them a total aversion to violence. When they take part in violence or witness it, the violence consumes elves so much that their minds may shatter from it which is why they don't have armies or police and rely on their laws and treaties.

When laws are broken, Tribunals are held with the accused is judged by the Council and are sentenced to variety of punishments which are minor. However certain crimes can lead to memory breaks, banishment from the Lost Cities, sent to Exile, or imprisonment at Lumenaria.

Every elf is born with a birth fund of five million lusters. They still add to the fund once they start working, so some families do have more money than the others. The birth fund is accessed by a gadget called the Treasury Cube. Vendors swipe the Cube with a gadget called a Deducter. However, no matter their wealths, all elves aren't able to purchase anything they want. Some objects are strictly restricted by status, like capes and leapmasters, the first being mandatory and exclusive to the nobility, while working/middle class elves can only use limited versions of the second. In similar fashion, only noble elves wear fancy gowns and lavish clothes, but it is unknown if this statu quo is enforced or simply an unspoken rule.

Elves can speak the Enlightened Language from birth. They have 2 written alphabets which elves are able to instinctively understand. Their primary one uses modern letters while the runic one is used for decorations and codes. Elves may also learn how to speak Ogreish, Goblinese, Gnomish, Trollish, and Dwarven. It is unknown wether this ability is genetically coded or learned in the womb.

Elves' lives are indefinite. No elves have died from old age. Instead, their deaths are caused by circumstances. So, they aren't immortal. But, they're also somewhat ageless and do not get gray hair or wrinkles like the humans. A 15-year old elf would look the same when they are a 5,511-year old elf except their ears' tops would be pointy. As a result, they don't celebrate birthdays and count age from conception onward.

Their celebrations are related to accomplishments or a natural event. For example, when there is a total lunar eclipse, Orem Vacker puts on a spectacular light show named the Celestial Festival. Other celebrations include the Opening Ceremonies, midterms, final celebrations, Winnowing Galas, weddings, and parties that are held for no reason.

The elves rely on light leaping, a process that lets the light break down their bodies so that they can hitch a ride and travel to places within seconds. Home crystal and Leapmasters are used until they are issued a pathfinder. Ancients used starstones to create their paths before leaping crystals were invented.

To elves, all life is sacred. As a result, they do not eat meat and believe no specie should ever go extinct on Earth, to the point that they preserves dangerous and genetically engineered species, and take great effort to turn them vegetarian as well, eliminating predatory instinct, to have them all cohabitate in the Sanctuary.

“We are elves. We live to dream and inspire. And when we need to, we regroup. We rebuild. At times, we even change–But only when such changes are for the better of our people.”

To see the full timeline of the elves, go to the Elvin History page.